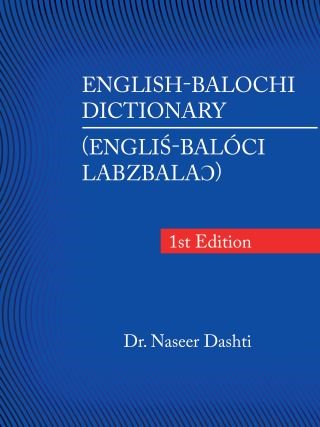 Compiled by Dr Naseer Dashti, this first-ever English Balochi Dictionary written in Roman script is a milestone in Balochi language and literature. Bringing together the Balochi equivalents of thousands of English words will certainly be a great help for learners, translators, scholars, and researchers. Balochi is one of the oldest languages in the world but for various reasons its development has been hampered. This dictionary being in the Roman script will be a great step forward for the development of the Balochi language.

Dr. Naseer Dashti: Dr. Naseer Dashti is the author of many books on Baloch, Balochistan, and Sindh. His books are on social, cultural and political issues facing the Baloch and related issues on South Central Asia in general and in Balochistan in particular. His books included: The cultural context of health; Baloch and Balochistan; The Baloch Conflict with Iran and Pakistan and Tears of Sindhu. His Balochi English Dictionary has been published in 2019. This is the first-ever Balochi English Dictionary written in Roman script. Dr. Dashti is affiliated with Baloch Academy, Quetta.