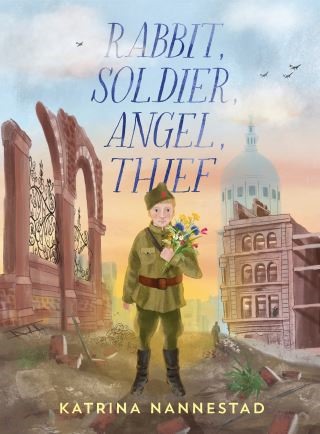 Award-winning writer Katrina Nannestad transports us to Russia and the Great Patriotic War and into the life of Sasha, a soldier at only six years old ...

Wood splinters and Mama screams and the nearest soldier seizes her roughly by the arms. My sister pokes her bruised face out from beneath the table and shouts, 'Run, Sasha! Run!'

It's spring, 1942. The sky is blue, the air is warm and sweet with the scent of flowers.

And then everything is gone.

The flowers, the proud geese, the pretty wooden houses, the friendly neighbours. Only Sasha remains.

But one small boy, alone in war-torn Russia, cannot survive.

One small boy without a family cannot survive.

One small boy without his home cannot survive.

What that small boy needs is an army.

From the award-winning author of We Are Wolves comes the story of a young boy who becomes a soldier at six, fighting in the only way he can -- with love. But is love ever enough when the world is at war?

Katrina Nannestad is an award-winning Australian author. Her books include the CBCA-shortlisted We Are Wolves, The Girl Who Brought Mischief, the Travelling Bookshop series, the Girl, the Dog and the Writer series, the Olive of Groves series, the Red Dirt Diaries series, the Lottie Perkins series, and the historical novel Rabbit, Soldier, Angel, Thief.

Katrina grew up in country New South Wales, in a neighbourhood stuffed full of happy children. Her adult years have been spent raising boys, teaching, daydreaming and pursuing her love of stories. Katrina celebrates family, friendship and belonging in her writing. She also loves creating stories that bring joy or hope to other people's lives.

Katrina now lives on a hillside in central Victoria with her husband, a silly whippet called Olive and a mob of kangaroos.