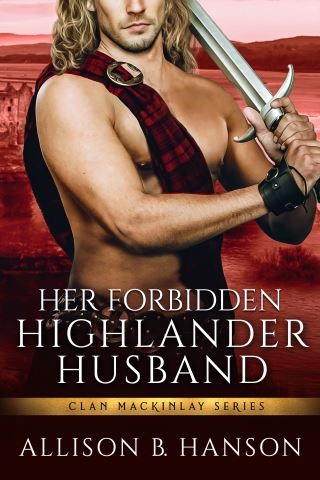 Liam MacKinlay is certain that when he asks for Evelyn Stewart’s hand in marriage, the third time’s the charm. For hasn’t he risen to war chief of the clan MacKinlay, a seasoned warrior, and an honored member of the clan that took him in as a child? But once again, her father denies Liam the lass he lost his heart to years ago.

Daughter of the Laird of the Stewart clan, Evelyn is expected to perform her daughter’s duty, including marry for the better of the clan…. even if that’s against her will. But upon learning her father plans to trade her to an unknown clan in exchange for cattle, she will do almost anything to escape the future set out before her— including running away and marrying Liam MacKinlay.

Liam’s discovering that beneath Evelyn’s sweet disposition is an iron will to match any warrior. But now their marriage may start a war between the clans and Liam must fight for his new wife and his family. Even if it means raising his sword against those he calls “kin”…

Allison B. Hanson: One very early morning, Allison B. Hanson woke up with a conversation going on in her head. It wasn’t so much a dream as being forced awake by her imagination. Unable to go back to sleep, she gave in, went to the computer, and began writing. Years later it still hasn’t stopped. Allison lives near Hershey, Pennsylvania. Her contemporary romances include paranormal, sci-fi, fantasy, and mystery suspense. She enjoys candy immensely, as well as long motorcycle rides, running and reading.