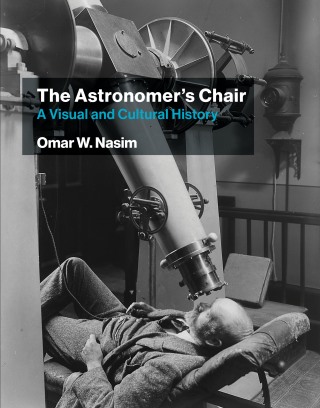 A Visual and Cultural History

The astronomer’s observing chair as both image and object, and the story it tells about a particular kind of science and a particular view of history.

The astronomer’s chair is a leitmotif in the history of astronomy, appearing in hundreds of drawings, prints, and photographs from a variety of sources. Nineteenth-century stargazers in particular seemed eager to display their observing chairs—task-specific, often mechanically adjustable observatory furniture designed for use in conjunction with telescopes. But what message did they mean to send with these images? In The Astronomer’s Chair, Omar W. Nasim considers these specialized chairs as both image and object, offering an original framework for linking visual and material cultures. Observing chairs, Nasim ingeniously argues, showcased and embodied forms of scientific labor, personae, and bodily practice that appealed to bourgeois sensibilities.

Viewing image and object as connected parts of moral, epistemic, and visual economies of empire, Nasim shows that nineteenth-century science was represented in terms of comfort and energy, and that “manly” postures of Western astronomers at work in specialized chairs were contrasted pointedly with images of “effete” and cross-legged “Oriental” astronomers. Extending his historical analysis into the twentieth century, Nasim reexamines what he argues to be a famous descendant of the astronomer’s chair: Freud’s psychoanalytic couch, which directed observations not outward toward the stars but inward toward the stratified universe of the psyche. But whether in conjunction with the mind or the heavens, the observing chair was a point of entry designed for specialists that also portrayed widely held assumptions about who merited epistemic access to these realms in the first place.

With more than 100 illustrations, many in color; flexibound.