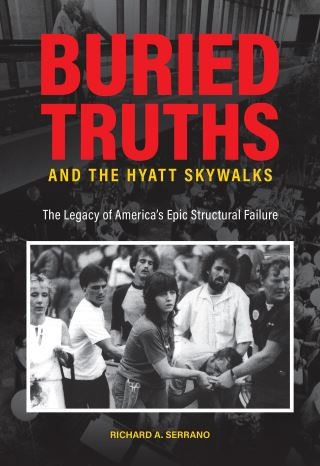 Buried Truths and the Hyatt Skywalks

In 1981 the sudden collapse of two skywalks in Kansas City’s Hyatt hotel killed 114 people and injured another 200. There never was a public trial, nor a full airing of everything that went wrong. Richard A. Serrano shared a Pulitzer Prize for his coverage of the disaster at the time; now he returns to the tragedy to learn all that went wrong, how it could have been avoided, and what lasting effects persist today—for engineering and the legal system, but most importantly those who suffered. Drawing on legal depositions, evidentiary material, and recollections from 240 survivors, first responders, and construction officials, Buried Truths and the Hyatt Skywalks is the story of this monumental catastrophe and what it teaches us today.

The Friday evening Tea Dance was all the rage that summer of 1981. Each week the lobby filled with throngs of revelers, some celebrating atop the skywalks themselves. On July 17, without warning, the steel support systems buckled and the concrete and glass skywalks crashed onto the crowded lobby. The devastation reverberated far beyond the ruins. Firefighters, police officers, and paramedics suffered from deep depression, cycled through divorce, hit the bottle, and in some instances committed suicide. The hotel had been built using a new fast-track method with key construction decisions often made on the fly, including changing the skywalk design from six heavy hanger rods to twelve thinner poles. Within a year the skywalks were splintering inside. Even then the collapse could have been averted, but special inspection panels to check the hanging walkways were never opened.

Though wholly avoidable, the Hyatt disaster did bring significant changes—some good and some problematic. Tougher industry guidelines were enforced for US construction projects. Police officers, firefighters, and health care workers are now treated for PTSD and other psychological trauma after working a tragic event. But the rush to settle all the Hyatt lawsuits helped usher in a controversial new era of nondisclosure agreements.

Buried Truths and the Hyatt Skywalks explores America’s worst structural engineering disaster. Though the world has moved on, survivors and witnesses still vividly recall that night. This is their story.

Richard A. Serrano: A native of Kansas City, Missouri, Richard A. Serrano reported on the Hyatt skywalks tragedy, the cause of the collapse, and the ensuing litigation for the Kansas City Times, for which he shared a Pulitzer Prize. Serrano later spent three decades with the Los Angeles Times, and shared in two more Pulitzers for covering the 1992 Rodney King riots in Los Angeles and the 2015 terror attack in San Bernardino, California. His other books deal with the 1995 Oklahoma City bombing, the US Army’s death row, the Civil War, and the American West.